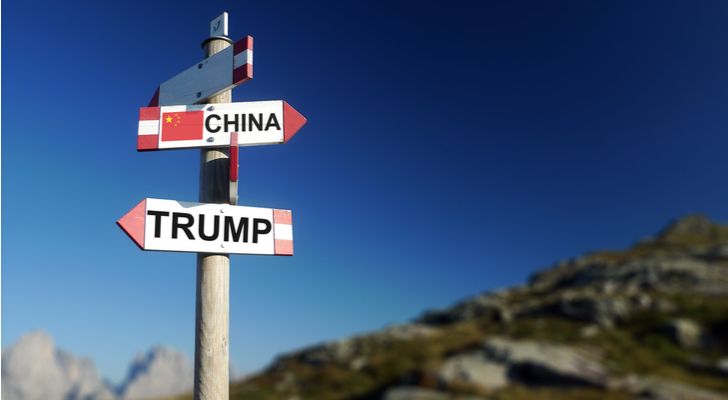 The end of last week saw the trade war between the world’s two largest economies heat up as Beijing pledged no further concessions in its negotiations with Washington and President Donald Trump responded on Friday by raising tariffs on $200 billion worth of imports from its trade rival.

Clearly a trade war is going to have a detrimental effect. Once word of the breakdown in talks between the US and China hit the investing news, the S&P 500 immediately plunged 1.2%. Wall Street recorded its worse work in 2019 Although, not all stocks are equal. Some stocks are going to be more affected than others by an escalating trade war. Those hogging much of this mostly unwanted spotlight are US multinationals with 50% or more of their revenue tied to China. However, there are some stocks that could benefit from a trade war. Here we look at the top two stocks to watch (and avoid) in a US – China trade war and why.

Although only about 20% of the tech giants’ revenues come from China. A 25% increase in tariffs would make the China-built iPhone more expensive. With iPhone sales slowing down worldwide, yet still accounting for 61.6% of all Apple Inc’s revenues, the company would be hit hard by an escalation of the trade war.

Casino and resort operator Wynn Resorts saw its stock plunge 5% on the trade war escalation news. The Las Vegas based company only just posted the first positive financial quarter in almost a year. However, 75% of its revenue coming from Macau and operating revenue from Wynn Macau declined 15.3% on an annual basis in the first quarter of 2019. With Wynn Resorts stock already falling 33.6% in 2018, this year looks to be even more challenging for the company already feeling the pinch in an already fiercely competitive market.

The next few months could be critical for these stocks. Forex strategies tend to go out of the window in these volatile and uncertain terms, but stock trading although just as volatile, tends to draw in the traditional and professional forex trader.