America’s First Private moon Lander will be made in India 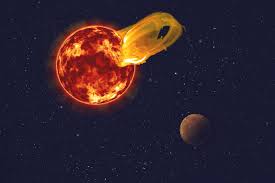 June 4, 2019 by Dennis Golden in Science
Spread the love

The principal US lunar lander in the 21st century will be structured in India, the aftereffect of NASA’s new readiness to re-appropriate creation of its space vehicles.

NASA says it will spend more than $250 million contracting privately owned businesses to transport logical missions to the moon. These secretly worked missions, some portion of the US space organization’s more extensive surge back to the moon, are intended to assemble information about the lunar surface and pilot advancements for landing automated adventurers.

Three organizations—Astrobotic, Intuitive Machines, and Orbit Beyond—have been granted contracts for missions into 2021. Circle Beyond has the most punctual deadline for its central goal, in September 2020.

Circle Beyond is extraordinary among the nine different members in NASA’s Commercial Lunar Payload Services (CLPS) program in that it is a consortium. The plan and development of its lander will be performed by TeamIndus, an Indian organization. (The Indian Space Research Organization (ISRO) is independently wanting to dispatch its first moon lander, Chandrayaan-2, in July 2019.)

TeamIndus was made in 2010 to partake in the Google Lunar XPrize, a $30 million challenge that could be won by sending a robot to the moon. The challenge was dropped when it turned out to be clear none of the members would make its due date. Be that as it may, many haven’t surrendered; Israel’s SpaceIL endeavored to arrive on the moon this year and fizzled, while other previous candidates like Astrobotic or iSpace in Japan are intending to advance with their missions.

Worldwide cooperation is normal in space designing: 15 countries, including the US, Russia, Canada, and Japan, assembled the International Space Station; the European Space Agency is building a basic module for Orion, a shuttle being worked by NASA; and NASA and the ISRO are teaming up on another radar satellite. Indeed, even the CLPS program will fly logical instruments from seven distinct nations to the moon.