What Do We Mean by Maharashtrian Bridal Jewelry? 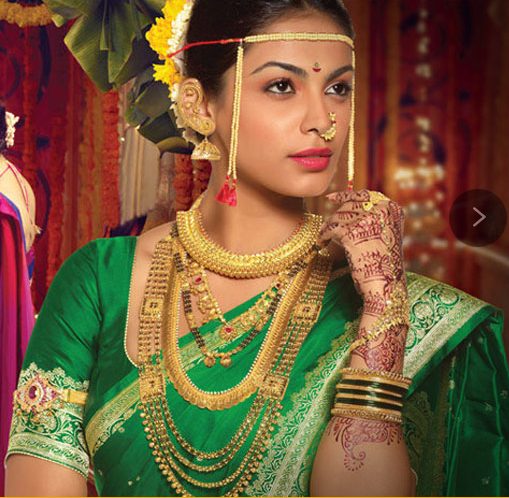 January 17, 2020 by Julie McElroy in Life & Culture
Spread the love

What is Classic Maharashtrian Bridal Jewelry?

There are different ornaments made from Silver, Gold and even Pearls that we can call as part of Marathi style bridal jewelry. Here are some of the most popular ornaments that you should know about before proceeding to buy the classic Maharashtrian bridal jewelry.

Mundavalya is the most important part of any Maharashtrian Wedding procession. It is nothing but the chain of pearls or the plastic beads that both Bride and Groom wear on their forehead. It has two parts swinging on both sides. Usually, the entire Mundavalya are made with the gold thread and original pearls. But many variations in the design has caused the makers to switch to the artificial pearls.

Vaki is nothing but the Armlet made of the Gold and Diamonds. It is worn by the Bride and also the Bridesmaid. It is made with the gold beads and sometimes the simple gold chain used as the Vaki. This ornament is pretty common in the Western part of Maharashtra, compared to the other parts of the state. It is a customizable Maharashtrian Bridal Jewelry, which you can customize with the design, and additions like Pearls, Diamonds, and Gemstones.

Nath or the Nathni is the traditional Maharashtrian Gold Ornament, which is worn on the auspicious occasion. There are only a few occasions, which deserve the Nath, and the primary occasion is the marriage. Without the Nathni, no bride looks like a typical Maharashtrian bride. Although it suits the best on Bride, almost every woman in the Marriage function wears the Marathi Style Nath.

Jodvi is the Marathi name for Toe Rings. In the Maharashtrian Culture, the Jodvis are wearing after the marriage. No unmarried girl can wear Jodvis due to traditional restrictions. It is gifted by the Grooms family to the Bride. So, it has immense cultural importance in the wedding function. The Jodvis are made with Silver, but some people prefer wearing gold jodvis.

Thushi is the Choker Necklace which is made entirely with the Gold. Thushi is made by joining the gold beads together. This choker necklace looks stunning on any bride in the marriage function.Thushi can be worn on any auspicious occasion that requires traditional jewelry, but it has the cultural value in the marriage ceremony.