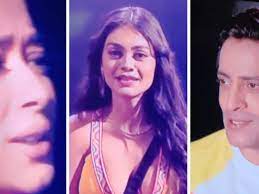 Tonight’s episode of Bigg Boss 16 came to a satisfying conclusion, but the focus now shifts to tomorrow—aside from the amusement and surprise that Bigg Boss had in store for Tina Datta, Shiv Thakare, and Nimrit Ahluwalia.

Actor Sreejita De, who was kicked out of the home in the first week, is returning, as is already known. She immediately started to come on with powerful fireworks, as was to be expected. She immediately engages Tina Datta in combat and completely trashes her. De then proceeded to enter the actual home and gave Shakin Bhanot a sensual hug to tease Datta even further.

The video of Manaktala entering the house hasn’t yet been released, but in his AV introduction, he made a lot of bold claims. He introduced himself by first declaring that he doesn’t care what other people think of him and then making sure his swagger was on point.

Although the promo promises craziness, we are eager to see what the wildcards have in store.