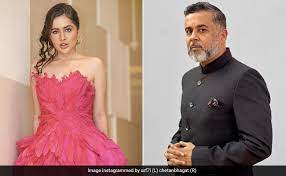 New Delhi: According to author Chetan Bhagat, his remarks towards reality TV star Uorfi Javed were misconstrued. After claiming that Ms. Javed was diverting young people in the nation, particularly boys, Mr. Bhagat has come under fire on social media.

The author of “2 States” claimed in a tweet that he only advised “guys” to concentrate on their careers and avoid wasting time on Instagram.

“I advised the lads not to waste time on Instagram and to concentrate on their careers and health. It seems that’s not acceptable! So they took my quote out of context, added things I didn’t say to the title, and created a click-bait article with ageism mixed in. No doubt, “said Mr. Bhagat.

Ms. Javed reacted angrily, accusing the author of dragging her into the dialogue unnecessarily.

Mr. Bhagat tweeted that the charges were false “I have never spoken to, chatted with, met, or known anyone where it is claimed that I have. It’s a scam. a lie. also not a problem. I have not voiced any criticism. I also believe there is nothing wrong with advising people to stop wasting time on Instagram and instead pay attention to their careers and fitness.”