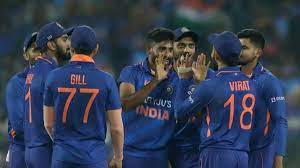 On January 21, India plays New Zealand in the second one-day international in Raipur. At this location, this is the first-ever international game. After winning the first ODI in Hyderabad, Team India is up 1-0 in the series. To maintain the series, the Kiwis must win this game. India would win the 2023 ODI series with one more victory. Both sides’ ODI World Cup preparations are continuing during the series.

The second and third ODIs will be played on January 21 in Raipur and Indore, respectively (January 24). A three-match T20I series between the two sides follows. On January 27, Lucknow, and January 29, and February 1, respectively, Ranchi, Lucknow, and Ahmedabad will host the T20Is.

India is without Shreyas Iyer, who is unable to play due to a back ailment. KL Rahul and Axar Patel, who elected to forgo the series for personal reasons, are also absent. Injuries to Jasprit Bumrah and Ravindra Jadeja are still being treated.

Given that they won the first ODI, the hosts are likely to start with the same lineup. Washington Sundar, Shardul Thakur, and Hardik Pandya appear to be the team’s preferred sixth bowling option. With Thakur playing at position eight, the combination also provides the team with batting depth.

In the second ODI, Rohit Sharma will continue to start the batting. He started off 2023 against Sri Lanka with 83 in the first innings. He hit 34 runs off of 38 balls and had a 60-run stand with Shubman Gill in the opening ODI match against New Zealand. The T20I series against the Kiwis does not involve Rohit. He had trouble scoring runs across all formats in 2022, despite making 249 runs in 8 ODIs the year before.