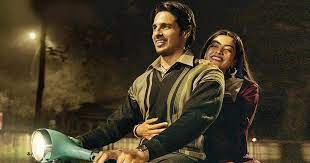 Pakistan attempts to imitate India in the race to construct the first nuclear bomb after India’s first successful nuclear test, code-named “Smiling Buddha,” in 1974. When India learns about it, it asks one of its undercover spies in Pakistan to send someone to Pakistan to investigate further. Amandeep Ajitpal Singh (Sidharth Malhotra), who goes by the identity of Tariq and makes a living as a tailor in Rawalpindi, enters with the line “Gadaar baap ka prayshchit karta hua ladka.”

He is undoubtedly the top student in his class, which is why R&AW chief RN Kao (Parmeet Sethi) selects him for this task. So how are you going to locate Pakistan’s nuclear bomb test site in 1974 without letting everyone else know? Identifying the one business that manufactures western toilets for the mission’s main character will help. As a result of Tariq’s efforts to obtain the knowledge, Nasreen (Rashmika Mandanna), with whom he is in love, is married and becomes pregnant.

For two reasons, Sidharth Malhotra shouldn’t have chosen this path after Shershaah: one, it would sow a seed of doubt in the minds of viewers about him choosing the standard “patriotic” path (tried & failed by Akshay Kumar), and second, this is a far cry from Shershaah. The disguise element clashes with his performance, and the inquiry process’s shoddy writing prevents him from demonstrating his acting prowess.

All things considered, Mission Majnu promotes another another patriotic episode in Indian history that merited better treatment. Sidharth Malhotra must cease acting formulaically or else prepare to meet the destiny that many Bollywood “A-listers” have.

Share:
Previous Post Realtor Global Real Estate Chairman of the Board Anıl Ulaş Övençoğlu
Next Post Anil Kapoor and Aditya Roy Kapur in The Night Manager trailer Meet Up In An Exciting Show About Betrayal