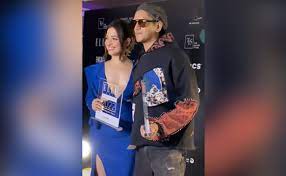 New Delhi: Because of their rumoured connection, Tamannaah Bhatia and Vijay Varma are generating a lot of discussion online. The two were seen together on Sunday at the Elle Graduates 2023 awards ceremony in Mumbai. Vijay not only interrupted Tamannaah’s photo shoot, but he also posed with her. Tamannaah was photographing herself holding her trophy when Vijay entered the scene and strolled passed the actress grinning. A paparazzo saw him and asked the Darlings star to take a photo with the actress. They cheerfully posed for the photographers holding their awards when Vijay complied.

Vijay kept things simple with a red jacket and black jeans, while Tamannaah Bhatia looked stunning in a vivid blue cutout dress. He dressed himself up with a fashionable headgear. View other images below:

Returning to Tamannaah and Vijay Varma, a video that circulated online claimed that the two stars celebrated New Year’s together in Goa. They appear to be dancing and hugging one other at a party in a popular video.