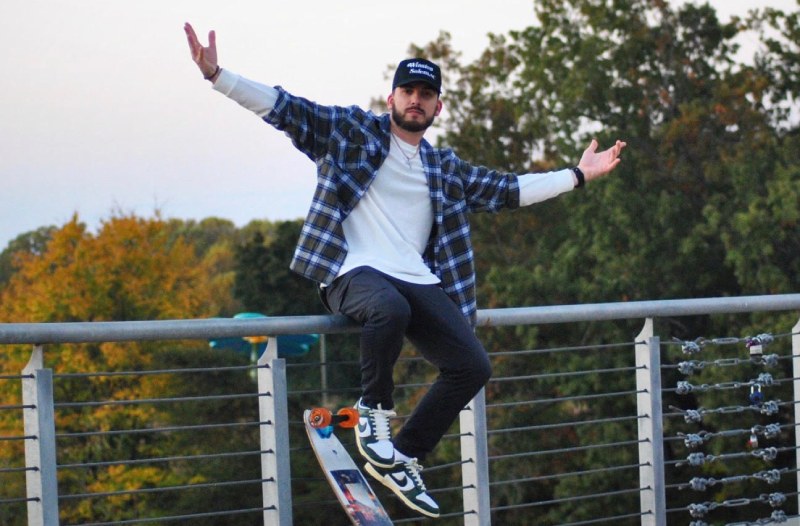 AV is a hip-hop artist located in Winston-Salem, North Carolina, with releases such as “Nemo” and “Deceiver”. He is one who has recently been making a buzz in his area with his versatile catalog, having people coming up to him reciting his memorable lyrics, and even having his music played in a local stadium! Through his music, he is spreading the message that you always have to be yourself, and do what makes you happy no matter what. He spoke on how he really had to use that saying in real life when he had his son at twenty-two, and how because of that, he can look back at his journey to his position today fondly.

AV’s journey in music started around 2016-2017, recording on an app called “RapChat” for some time. Some time later, he took his talents to a studio and recorded his first song, called “Stop Dripping”, and then recorded his first project, “Commencement”. The immediate feedback for these songs was very positive; the ball started to really roll. He spoke on how he always loved music as a kid, and played multiple instruments at that time as well. His biggest inspiration with music, and everything else in his journey is his son; he speaks on how he gives him the motivation to create the music that many love. Some artists that do inspire him as well when it comes to his music-creating process are ones like Lil Uzi Vert, Mike Stud, Caleb Gordon, and many more.

To all good music, there is always a music creating process for it. He speaks on how he is very quick with how he makes his songs, he will hear the beat and press record off the rip, finding his melody and flow as if it is a freestyle. Sometimes, it won’t even be a freestyle; he will just hum it out to find that wavy feel that is needed. Once he has everything to his liking, he writes to the patterns of what he freestyled, and punches in the vocals, creating the music. AV is looking forward to building a platform to help others, spreading positivity all around the world. He plans to sell out shows in the future, when the pieces come together, and be the one who creates good music for people who like to have a good time.

AV’s “The Next Chapter Vol. 2” is out now! It is a sequel to “The Next Chapter Vol. 1” that dropped two years ago. Songs like “Touchdown” in the project show AV’s melodic side, going back to the earlier days in his life when he played football as a quarterback. He also shows versatility in the project with songs like “In Session” as well, demonstrating his ability to use punchlines and rap quickly. He plans on staying consistent, releasing records, videos, and shows for the people who have kept an eye out for him, and the people who just found out about him, as well. “Just glad to be here and continue to grow and do what I love”.

Share:
Previous Post Shivin, a transgender participant on “Bigg Boss 6,” has a heartbreaking love story
Next Post Swedish Rapper T-Weezy to Release His Next Album Tell the Truth Volume 1