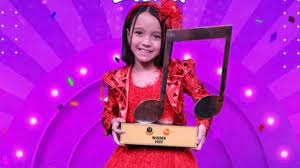 The top six contenders competed fiercely throughout the finals episode, putting up their best performances. The top six competitors were Harsh Sikandar, Rafa Yeasmin, Atharv Bakshi, Atanu Mishra, Jetshen Dohna Lama, and Dnyaneshwari Ghadge, however Jetshen won the competition. Hema Malini, who last lauded Jetshen, said that she had a voice like to the famous Lata Mangeshkar.

The judges, Shankar Mahadevan, Anu Malik, and Neeti Mohan, selected Jetshen as the winner and gave him the trophy. Dnyaneshwari Ghadge, 12, and Harsh Sikandar, 9, were named first and second runners-up, respectively. During the episode, Jackie Shroff played the manjira and Amit Trivedi requested Jetshen to sing ‘Pareshaan’ with him on the stage.

Jetshen, a huge fan of rock music, began singing when she was just three years old. The nine-year-old shared her joy after winning the trophy and stated in a prepared statement: “It’s like a dream come true, really. All of the competitors are really talented, so the competition was fierce. My journey has been a tremendous opportunity for me to learn, and I am appreciative of all my mentors who have continuously encouraged me and helped me realise my potential as a vocalist.”

It has always been a pleasure to hear her sing, Anu Malik stated as he sent Jetshen his best wishes. Since the beginning of this season, she has developed. She undoubtedly has a promising future in front of her.

Share:
Previous Post Suniel Shetty promises photographers at Athiya-KL Rahul’s wedding, “I’ll bring the kids.”
Next Post What Is the Best Way to Pay Yourself from Your Corporation?