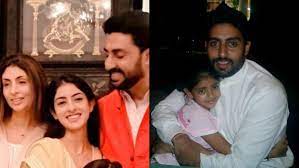 Actor Abhishek Bachchan sent birthday wishes to his niece Navya Naveli Nanda on December 6, the day of her 25th birthday. On Tuesday, Abhishek shared a flashback image of himself and Navya Naveli Nanda from her early years on Instagram. A birthday post for her daughter was also shared by Shweta Bachchan in response to their photo.

Abhishek and Navya were seated next to one another in the picture, smiling and holding hands. Navya was seen wearing a pink dress, while Abhishek was dressed in white. Abhishek posted the image with the caption, “Cheers to my musical partner’s birthday! Admiring you, @navyananda”

Shweta Bachchan, the mother of Navya and the sister of Abhishek, responded to the tweet by saying, “This is adorable. The finest Mamu (uncle) ever (emojis for crying face and love eyes).” You are loved, Navya wrote. Ayaan Ali Bangash, a sarod player, tweeted “Many many happy returns @navyananda” in support of Navya. On Abhishek’s post, celebrities like Maheep Kapoor and Bobby Deol used red heart emojis.

To diffuse (the situation), Navya asked? Mamu always acts in that way. When he notices that the tension is building, he begins to play some music. And the music is never soothing. There is always house tech music playing.