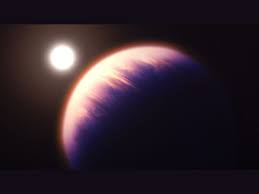 Images taken by the James Webb Telescope of NASA provide fresh details on the molecular and chemical composition of the faraway exoplanet WASP-39b.

WASP-39b is an exoplanet, which implies that it is located about 700 light years away from Earth and outside of our solar system.

The fresh readings from Webb provided additional detail on atoms, molecules, and even hints of active chemistry and clouds, whereas Webb and other space observatories previously disclosed some of the isolated components of this scorching planet’s atmosphere.

The most recent information also suggests that rather than covering the entire planet uniformly, these clouds may appear fragmented up close.

WASP-39b is a gas-filled object that is as massive and as large as Jupiter and is also incredibly hot. Since it was first found roughly ten years ago, the planet has attracted the attention of many experts.

The chemical makeup of WASP-39 b points to a history of collisions and mergers between planetesimals, or smaller bodies, to form a final goliath of a planet.

Share:
Previous Post The top five PS5 accessories to purchase on Black Friday in 2022
Next Post Alia and Ranbir named their daughter Raha, and Deepika and Ranveer REACT to the news; Priyanka Chopra has a nice message