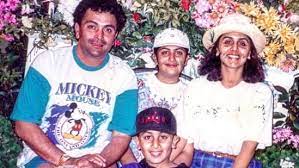 The actor posted a vintage photo of Rishi and Neetu Kapoor with their children Ranbir and Riddhima Kapoor Sahni in honour of their wedding anniversary.

On January 22, Neetu and Rishi Kapoor would have commemorated their 43rd wedding anniversary. Neetu celebrated the day by posting an old family photo of their children Riddhima Kapoor Sahni and Ranbir Kapoor. On April 30, 2020, Rishi Kapoor passed away after a protracted illness. “Time flies… only memories,” Neetu captioned a picture from Ranbir and Riddhima’s early years that she posted on Sunday in memory of her late spouse.

The seasoned actor was dressed in a pair of blue shorts, a white T-shirt, and a hat in the flashback image Neetu shared on Instagram to commemorate her and Rishi’s wedding anniversary. In a photo of their family taken when they were little, Riddhima and Ranbir Kapoor were both wearing casual clothing and headgear. Mickey Mouse appeared on a graphic T-shirt that the late Rishi Kapoor was wearing. The four members of the family smiled for the camera as background fresh pink and white flowers, perhaps from a getaway. Riddhima added several heart emojis to the image. As they left comments on Neetu’s post wishing the pair a happy wedding anniversary, many followers thought of Rishi.

After suffering leukaemia for two years, Rishi Kapoor passed away on April 30, 2020, in Mumbai during the Covid-19 lockdown. He was receiving treatment in New York with Neetu and her family just before he passed away. On April 14, 2022, his son, actor Ranbir Kapoor, tied the knot with Alia Bhatt. Raha Kapoor, the couple’s daughter, was born in November 2022. The daughter of Rishi and Neetu, Riddhima Kapoor Sahni, is wed to businessman Bharat Sahni of Delhi, and the pair has a daughter named Samara Sahni.