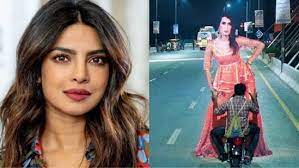 Joyland, a film from Pakistan, “is genuinely a joy to see,” according to Priyanka Chopra. The first ever Pakistani film to be nominated for an Oscar is Joyland. Initially, the Pakistani government attempted to forbid the movie from being screened there, alleging “extremely unpleasant” content.

Joyland, a film from Pakistan, continues to fascinate famous people. As the first ever Pakistani movie to be nominated for an Oscar, Priyanka Chopra praised the shortlisted movie on Twitter and Instagram on Tuesday. In a tweet, Priyanka shared a clip from the movie and said, “It is extremely enjoyable to watch Joyland. The entire team deserves praise for bringing this story to life. You must watch it.” In response to Priyanka’s shoutout, the cast and crew of the movie expressed their gratitude to her for complimenting it.

The main character of Joyland is the youngest son of a conventional Pakistani family who works as a backup dancer for a Bollywood-inspired burlesque performance. He develops feelings for the transgender woman in charge of the play, Biba (Alina Khan). The movie stars Ali Junejo, Rasti Farooq, and Alina Khan and was written and directed by Saim Sadiq. Malala Yousafzai, the laureate of the Nobel Peace Prize, is also an executive producer.

Joyland made its world premiere at Cannes Film Festival 2022 last year and took home the Queer Palm and a jury prize. Joyland was shown at many festivals after its Cannes premiere, including the Toronto International Film Festival. The Pakistani government first attempted to forbid the film from airing in the nation, citing “very offensive” content, despite the accolades the film has received. As Pakistan’s official entry, the movie was recently shortlisted for best international feature film at the 95th Academy Awards and has been nominated for best international film at the 2023 Independent Spirit Awards.

Share:
Previous Post In this interview, Jr. NTR mentioned accent. He was made fun of for his
Next Post VR1 Digital is a digital agency with a great team of Creative experts