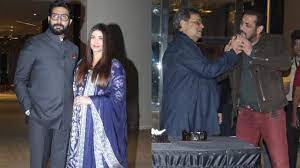 Subhash Ghai, the “showman” of Bollywood, has been absent from the scene for many years. In 2014, he produced and directed the movie Kaanchi. Along with Kartik Aaryan, Mithun Chakraborty, and the late Rishi Kapoor, it featured newcomer Mishti Chakraborty in the starring role.

But the active filmmaker makes a point of staying in touch with his colleagues. The director celebrated his 78th birthday yesterday by throwing a party at which many celebrities showed up.

Abhishek Bachchan and his wife Aishwarya were spotted at the event. Aishwarya looked stunning in a royal blue salwar kameez, while Abhishek looked sharp in a black bandhgala. For makeup, the diva chose to leave her hair open and sported pink lips.

Salman Khan, another superstar, was spotted entering the location. The actor maintained his laid-back appearance and was spotted sporting denims and a brown jacket. Mahima Chaudhry was also spotted at the event, dressed all in white.

For more than three decades, Subhash Ghai has produced successful films including Kalicharan, Karz, Hero, Ram Lakhan, Khal Nayak, Taal, and many others.